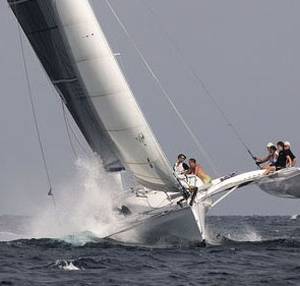 Keep your eyes peeled at this year’s Phuket King’s Cup Regatta and you may just spot what the Organizing Committee are expecting will be the Asia premier in a regatta of a new class of Trimarans in the shape of the Seacart 26.

Regular King's Cup visitors will remember Thor, skippered by Henry Kaye, a Seacart 30 that took honors in nearly every regatta that it competed in, including a clean sweep of first places in the 2009 Phuket King’s Cup. The new 26-footer is expected to go faster.

Designed by Marc Lombard, designer of the Seacart 30, the boat is being built here in Thailand by Composite Marine for shipping around the world on behalf of Lake Marine of Sweden. A sure sign of the strength and expertise of the boat building industry in Thailand.

At a fraction under 8m in length with a beam of 5.6m the new boats weigh in at just under 800kg making them ideal for inshore racing and perfect for the waters around Phuket. They are also foldable making them suitable for trailoring to Regattas without the need to undergo long deliveries.

North Sails have worked alongside Lake Marine to create a custom designed set of sails that will push the boat to its limits in high winds yet still be capable of dealing with the light winds that you often find in Asia.

Ten of the boats are already on order although it is expected only one or two will make it to Phuket for this year’s King's Cup. Maybe in a couple of years the numbers will be enough and another one-design multihull class could be launched at the Phuket King's Cup Regatta.

With the Seacart 26 being such a new class of boat and the only previous racing records being Cowes Regatta earlier this year, multihull racers at this year’s Phuket King's Cup will be keeping a close eye on the Seacart's progress.., quite possibly from behind.

Insiders have reported that the Seacart 26 handles very well and is lightning fast under optimum conditions – every bit as fast as the Seacart 30. 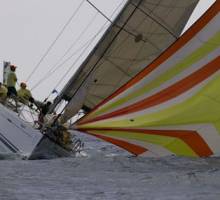