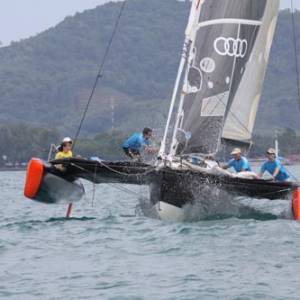 Now in its fourth fantastic year the SEA Property Multihull Championship in conjunction with the Ao Chalong Yacht Club, is taking place from 15-17 July. This event is Asia’s biggest multihull regatta offering superb racing conditions in a unique event that has expanded an impressive 30% year on year since it began in 2008. This year’s race will see an exciting array of 25-30 yachts on the start line daily, the introduction of two new classes plus the national championship competition for the Corsair Cup.

The tropical waters surrounding Phuket are particularly appropriate for racing multihull yachts and with the number of catamarans and trimarans located throughout Asia on the up, more and more sailors are joining this thrilling event to take advantage of the opportunity to race a multihull. Plus by popular demand, the organisers of the SEA Property Multihull Championship are also introducing two new racing divisions for 2011, a Cruising Class and a Classic Class. The event continues to be the biggest Firefly yachting race in Asia with a full fleet anticipated in a highly competitive class, whilst over 12 yachts are expected in the Ocean Multihull Class.

What marks this regatta as unique are Phuket’s changeable July winds leading to an inconsistency in race results. Countless memorable moments have been made in previous years where a race has taken place on a windy morning followed by a huge drop in winds throughout the afternoon, resulting in different boats staking their place race by race. This variety of the weather conditions makes for an ‘all to count’ or no mistakes race, everything counts in this regatta and yachties can’t afford to have a bad day as it will be tallied.

As regattas go, the SEA Property Multihull Championship is considerably low effort in that everything takes place from Ao Chalong Yacht Club located on the south of Phuket Island. You’ll be hard pushed to find a setting as visually stunning as this in which to sail, so it’s no surprise that the organisers have a brilliant selection of sponsors on board to add to the action on and off the water. Principal sponsors include Corsair Marine, Derani Yachts and Sea Bees, whilst the Ao Chalong Yacht Club, Andaman Cabriolet and SEA Yachting form the lineup of co-sponsors promising some special prizes.

Corsair Marine, Derani Yachts and Sea Bees each sponsor a post-race party at Ao Chalong Yacht Club, with a total of four parties taking place over the three days racing. Parties include a free bar and free food served from 6:30 to 8:30pm, with prize giving taking place early Sunday evening. In addition sponsor Corsair Marine will be running their national championship where winners will take home the prestigious Corsair Cup. The addition of the cup has brought with it a host of new entrants from the top of the Gulf.

Director of Racing Peter Dyer is looking forward to welcoming crew from across the globe in what promises to be another spectacular year “The SEA Property Multihull Championship is very appealing for so many reasons. Firstly the waters off Phuket are absolutely perfect for this type of racing, secondly everything is happening from Ao Chalong Yacht Club requiring minimum effort on part of the crew plus the entrance fee per boat is very reasonable at only 7,000 THB. The regatta itself is packed full of surprising moments due to the unpredictable July weather making it a pretty open race, although yachts to watch this year are Alan Carwadine’s Sidewinder, Corsair Marine’s Miss Saigon, the Andaman Cabriolet Da Vinci and of course Voodoo Child in the Firefly class. If you’ve never raced in a Multihull but always wanted to have a go, then why not come over and join in.

Registration takes place on Thursday 14th July with briefing taking place at 9am on Friday 15th July. This is followed by a programme of five races – two taking place on Friday, two more on Saturday and one on Sunday. To find out more, please contact Peter Dyer at race@sea-property.com or on +66 81 892 3111 for more details. 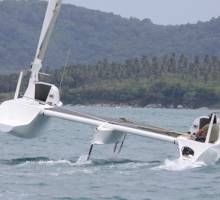 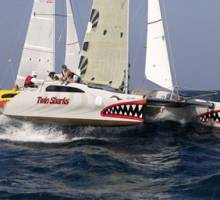 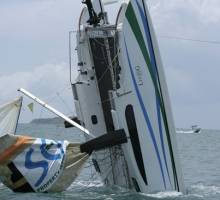